A small accessory with a big impact

Nanobees exist to reduce the number of pimps on our streets, in parks and beaches.

It is a small pocket ashtray made of recycled paper, which fits both in the handbag and in the jacket pocket.

A Swedish innovation to fuck the right way. Odorless and made from recycled paper.

Nanobees exist to reduce the number of pimps on our streets, in parks and beaches. It is a small pocket ashtray made of recycled paper, which fits both in the handbag and in the jacket pocket.

This is to be both easily accessible to you as a smoker but also as a simple solution to a major environmental problem. The uniqueness of the Nanobin is its appearance, color and shape, and its functionality. It is odorless, flameproof, made of paper, holds up to 15-20 cigarettes and it is thrown in the garbage when it is full.

Sign up for our newsletter and get a 10% discount

The Nanobin is a cylinder-shaped container that is made from recycled paper and is odorless and flameproof. There is room for about 15-20 cigarettes per container and when it is full, you throw it in a combustible.

Simplify your everyday life with Nanobin

We behind the company

Nanobin consists of a team of 4 people who handle order processing, logistics, deliveries, marketing and financing.

The smoking ban, which was introduced in 2005, has caused cigarette smoking to move outdoors, and thus the number of pimps in streets, squares and parks has increased. The most common litter is cigarette butts. Approximately one billion pussies end up on the streets and squares every year, which equates to 2.7 million per day. In the municipalities that measure litter, 62 percent of the litter consists of farts. This has created both large costs for society and damage to the environment, which was the starting point for Nanobin.

Nanobin is not a product that encourages smoking, but is a product that reduces the impact on our environment, until the number of smokers is reduced to zero. Therefore, there is a great need for a product that creates the opportunity to take active environmental responsibility.

The modern smoker is usually an environmentally conscious consumer who has not been given the chance to take clear environmental responsibility. On the contrary, the number of public ashtrays has decreased. Our market research shows that as many as 74% think it is wrong to throw a fart on the street or in nature. There is therefore also a clear willingness to pay to be able to take responsibility for the environment.

Discarded cigarette butts that end up in our waters are harmful to our fish.

Alice Hertz Dahl, founder of Nanobin AB is an entrepreneur and inventor and has studied at the Gothenburg School of Economics.

She has a commitment and drive for product development where she e.g. worked together with Starbucks and Estrella and developed the first fat-free salad dressing in Sweden.

Today she runs Nanobin, the first pocket ashtray for a cleaner society!

"After using Nanobin for a couple of months, I can highly recommend carrying them in your purse so you don't litter. My favorite is the gold colored one" 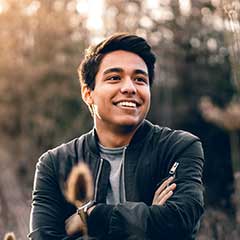 "As an environmentally conscious smoker, I think Nanobin is great to have in your pocket when you're outside the pub. You don't have to litter"